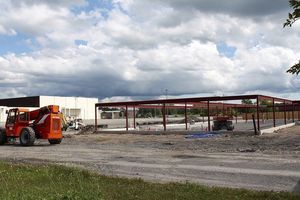 Construction has begun on a new 9,000 square foot medical office on the Williams Road side of the Summit Mall complex.

The new building will be occupied by Retina Consultants, a group of optometrists who specialize in the diagnosis and treatment of diseases of the retina and vitreous of the eye. The practice has offices at three Western New York locations, including one across the street from the new location in the Summit Healthplex.

“As a retina group, most of our patients are over the age of 65,” said Administrator Jerry Maciejewski. “They have difficulty seeing, or can’t see, and trying to find us in 100,000 square foot building with limited signage and their visual impairments makes it difficult. Let alone walking from the parking lot to the facility is a little far, it’s really a matter of convenience for patients.”

The building will be located near the main entrance to the mall off of Williams Road, near where the small M&T Bank branch used to be located. They firm purchased the property from new Summit Mall owner Zoran Cocov.

The new building while have space enough for both Retina Consultants and another business. They plan to rent the space out, ideally to another medical firm.

“We’re going to occupy 45,000 square feet of it and we’re looking for a tenant or tenants,” Maciejewski said. “Another medical group would obviously be nice, but any professional business. We don’t want a retail business.”

Another reason for the move, he said, is that the firm has outgrown its facility across the street. Patients often move through the process of exam, diagnosis and treatment quickly to save them time, money and to make things easier for the person driving them, as many of their clients are unable to drive themselves to and from appointments.

The new Retina Consultants is expected to open its doors sometime in October.

This entry was posted in Uncategorized. Bookmark the permalink.